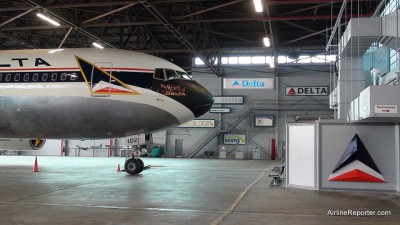 They have some pretty amazing displays at the museum, including an immaculate DC-3 that has been fully restored (photo). However, this Boeing 767 has a story to trump the beauty and rarity of the DC-3.

The aircraft served the airline well flying passengers for 23 years. After it was time for the Spirit of Delta to retire, she went on farewell tour. This was to give employees and fans a last chance to see the historical aircraft in flight. Painted in her original colors, she flew for two weeks around the country before making her final stop in Atlanta. On May 7, 2006 she found her new home at the Delta Air Transport Heritage Museum, where she can still be found today.

Also check this stuff out:
* More photos and information on the Delta Heritage Museum’s website
* See all the different liveries seen on the Spirit of Delta
* 168 photos on Airliners.net of the Spirit of Delta’s life
* The story on Delta’s blog