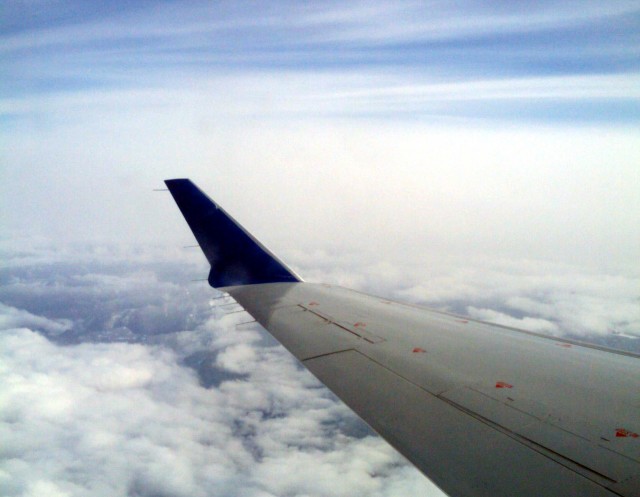 Flying on a CRJ 700 down to LAX to catch my flight to Hawaii.

Maresa writes the blog Around Puget Sound and when she was recently taking a trip to Hawaii on United Airlines, I asked her to write up a review from a non-airline nerd perspective. This is her review in her own words:

My United Airlines Review – The Beginning

I’m on my way from SEA to LAX to ITO (Hilo, HI). It’s time for a vacation; to get away and escape from the fast paced life we all seem to live in these days. I’m hoping for good weather for hiking, biking, and snorkeling. I’ll be staying in my very favorite vacation rental: Papaya Sunrise on the East side of the Big Island during the week of my visit.

Currently, I’m traveling from Seattle to L.A. I’m riding in a CRJ700 and it’s tiny! I’ve never been in a commercial jet this small on the mainland before. As many of you know, Hawaii has many inter-island jets that are about the same size.

We took off from Sea-Tac only about 10 minutes late, but our expected arrival is still ’˜on-time’. I have about a four hour lay-over in LAX, but the way I see it is I’d much rather have way more time than necessary than be stranded somewhere I just didn’t mean to be.

It’s always exciting to fly. I love the views I get over Washington. I feel extra fortunate when I get the added bonus of flying past Mt. Rainier–talk about a spectacular view!

One of the nice parts about the smaller jet is it took hardly anytime to board the plane. Also, United was willing to check larger bags for free at the gate that were too big to fit in the narrow overhead compartments. My carry-on bag fit just fine, but it was nice to have the option to check it and to have enough space up ahead for my backpack. The folks on the flight who did check their bag will be able to pick up their bag right after getting off the plane without going to baggage claim.

Right now, the woman next to me is dozing with four radiant sunflowers clasped in her grip, undoubtedly from Pike Place Market. It’s a good reminder of Seattle, of the summer to come, and the sunshine that I’m on my way to see. 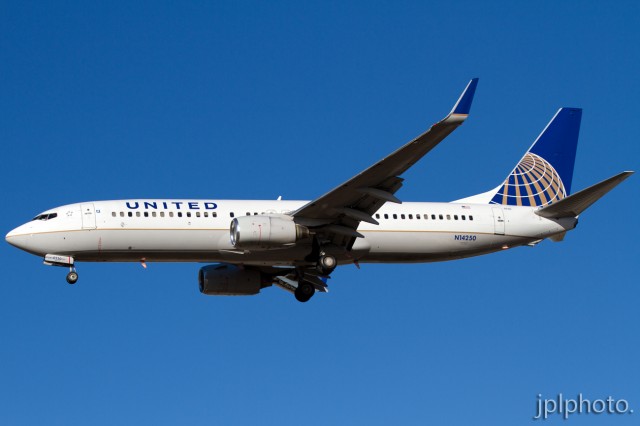 From LAX to ITO, I rode on a Boeing 737-800. Not this exact one, but one like it. Photo by Jeremy Dwyer-Lindgren

Wow, LAX was huge! My connecting flight wasn’t too far from where I landed. I have to tell you though, this second flight is shaping up to be much stranger and unpredictable than the first part.

When my fellow passengers and I were waiting to board, many people were struck by how rude the gate agent collecting boarding passes was to fellow passengers. ’œNo, don’t go in that line! I said the right line–not the left!’ The United/Continental worker shouted to customers. ’œNo, rows 30 and higher may board, only rows 30 and
higher!’ Calm down lady–I think you’re taking this all a bit too personally.

I found out a few minutes later that she wasn’t looking or scanning at the tickets she was collecting from people either, which meant that anyone with a ticket of any sort could board the aircraft–and someone did. A man got my plane to Hilo but didn’t find out he was on the wrong plan until he found someone sitting in his seat–how could there
be two people in seat 28E? ’œIsn’t this flight going to Denver?’ The man asked. ’œNo, we’re going to Hilo as in Hawaii…’ The flight attendant responded sounding surprised. The man quickly grabbed his things and deboarded the plane. ’œIn all my six years of working as a flight attendant, I’ve never had that happen!’ The flight attendant said shaking his head.

After only 20 minutes in the air the pilot informed us that we’d be experiencing some turbulence for the next 150 miles–how long it would take to pass through, they didn’t say.

Now I’ve done a lot of traveling and encountered some pretty bad turbulence but this far surpassed it all. The flight attendants were all losing their footing and desperately trying to hold on. The SnackPacks were bouncing all over in the carts and were about ready to bounce out onto the floor. At the moment that I thought someone might
actually start to panic, one of the flight attendants actually did. He exclaimed, ’œBuckle up, buckle up! We’ll come back with the drinks and food, is everyone buckled, because I need to go buckle up.’

After a while, the turbulence settled down and the beverage service began again.The flight attendants were going right along and missed my row entirely. I called him back and wound up drinking a flat Ginger Ale. Great. 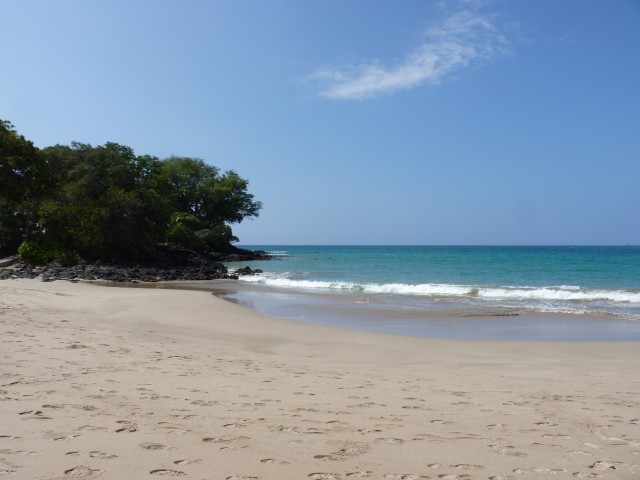 Mauamai Beach on the West side of the Big Island.

The flight attendants have just come back with another round of beverages and somehow they missed my row and walked right passed us again. When the attendant was called back by my seat-mate the man serving the drinks said abruptly to me, ’œWhat’d you want?’ ’œCranberry juice please,’ I asked. ’œHere–’ the man says shoving the can of juice
at me.

United/Continental, I was not amused…not amused. I heard one passenger say, ’œNever have I seen passengers treated with such disrespect,’ but thank you for getting us all to paradise safely.

If you are looking for things to do around the Puget Sound region either as a resident or a visitor, be sure to check out Maresa’s blog, follow on Facebook or Twitter.