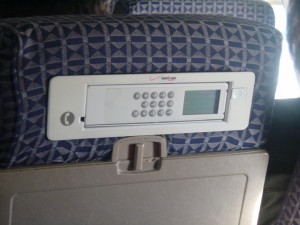 Remember these? They were aboard a lot of flights, barely used and cause few disruptions. Would personal cell phones be worse?

People on cell phones can be very annoying. However our society runs on cell phones. Using cell phones to talk on airplanes in the United States is banned, but not in all places of the world.

Mary Kirby, on her blog RunwayGirl, took a look at cellphone usage on airlines that already allow it.

AeroMobile, who currently provides cell phone service on 60 of Emirates’ aircraft, had over 11,000 voice calls in February 2010. Yes, with the vast number of passengers who flew on Emirates during that time, it is not an overwhelming percentage, but 11,000 calls still shows there is a demand for airborne phone conversations.

Kirby’s blog has lot of interesting graphs showing how cell phone calls from flights are greatly increasing. There has been talk of cell phone calls being allowed on US flights in the near future.

First off all, I am not a fan of talking on the phone. I prefer email, texting and using Twitter vs talking on the phone.  The fact that I am not reachable by phone, is ok by me. However, the airline industry doesn’t run based on just what I want (would be cool if they did).  I know it would be a revenue builder for airlines, but would it be worth it?

Some ask, “How is it any different from two people talking to each other, who are sitting next to you?” There’s a big difference. A lot of people on cell phones are louder and less aware of their environment. I have been on buses, trains, in just general public and heard people talk about things on a cell phone they would never talk about that loudly in person (once I even heard a person even gave their full credit card number, date of birth and other personal information loudly over their cellphone). How many times do I need to hear,  “Can you hear me now?”

Currently the FAA does not allow cell phones to be turned on during flight in the US, from fear the signals  could interfere with the airplane’s equipment. However, many flights globally have shown that cell phones cause no threat to airlines  (Myth Busters also showed they caused no harm a while back as well).

My initial reaction has been to keep cell phones banned, but am I off base?  I mean, cell phones have been active in flights since 2007 around the world and there hasn’t been any backlash or huge fights caused like some had predicted. Of course calls are limited since not many airlines offer it. They are expensive and only a few lines are offered on each flight, but those can all change. Many airlines are already moving towards offering internet on flights, should cell phones be next?