Air Force One about to land at Seattle-Tacoma International Airport

Air Force One has been an iconic aircraft since before I was born (not caring who was onboard, of course). Yes, I know that any aircraft carrying the U.S. President is called Air Force One, but I am talking about the two VC-25As – built off the Boeing 747-200 – that typically fly the president around the world. Those two planes (registration SAM 28000 and SAM 29000) not only represent the office of the president, but also our entire nation. In some ways, it says who we are as a people and how we want other nations to see us. Our country is also in the process of upgrading Air Force One to a pair of Boeing 747-8 Intercontinentals, called the VC-25B. You can probably look up dates when they might be finished, but I am willing to bet that the aircraft will be delayed.

I have also always been interested in the types of aircraft that other world leaders use for official duties around the world. Does it say something about their people? Their economies? Embargoes? Or what they might find cool and interesting? In this story I wanted to share in photos some of those aircraft. I am for sure not going to hit everyone, just those that I find the most interesting. Some leaders have an entire fleet of aircraft, while others might lease commercial aircraft from other countries to act as their state planes. The lines can often get blurred, but there are some interesting ones out there! I am not trying to make any political statements on why one state might run a fleet of wide-bodies, while another has a Cessna 152.

As you are looking through them… think about which aircraft you would want if you were a world leader. Sure, the Boeing 747 or Airbus A380 might seem like an easy choice for those who want to show off a bit, but not all airports can handle those big gals… hence why the U.S. has quite the fleet, including Boeing 757s (aka C-32), 737s (aka C-40), and many other aircraft at their disposal. Here we go! 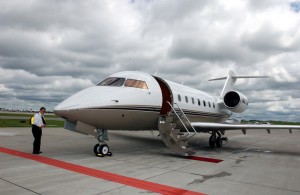 Delta Private Jets have a variety of aircraft one can choose from. No matter the model, expect the red carpet.

For many of us, flying first class is what we strive for. The use of lounges, big and comfy seats, decently good meals and of course top-notch service. Most first class experiences are great, but can be a little pricey, costing double to triple the amount on domestic flights to over $20,000.00 on some international flights. For many it is just a dream. Although I have heard many people ask, “how can so many people afford to fly first class?” There is something even pricier for those who almost never have to ask “how much is that going to cost?” — the private jet.

Once you have crossed over from scheduled airlines to the world of business jets, there is still a whole range awaiting you. From your very own private Airbus A380 to renting a few hours on a small Cessna Citation Mustang; the prices vary greatly.

For those people who live in the business jet realm, but still need to be on some sort of a budget, Delta Air Lines offers their Delta Private Jet service, which allows individuals and businesses to fly from first class (well I guess economy if you really wanted to) on a Delta scheduled service to a private jet waiting to whisk you to your destination. This is where we all take a deep sigh and wish life was like that… well, for some it is a way of life.

Delta Private Jets has been around since 1984, but has gone by quite a few different names: Comair Jet Express, Delta AirElite and most recently Delta Private Jets. The organization is based at Cincinnati/Northern Kentucky International Airport (CVG), but their aircraft are located around the country to better serve customers. Delta is the only US airline to offer such a service. 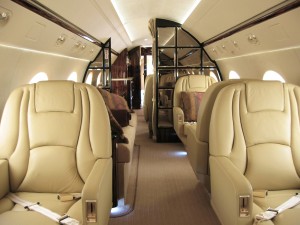 First Class has nothing on traveling in a private jet -- so at least I hear.

This concept really works well for people who might have to travel via one method (commercial vs private) for business and the other for leisure (or vice versa). One is able to earn miles and have status through Delta Private Jets and Delta Commercial.

“Delta Private Jets provides our customers with a seamless, quality air travel experience and with the resources of Delta Air Lines behind us, we are building a unique product and position in the private air travel market,” Jim Segrave, President of Delta Private Jets explained. “We offer what private jet customers are telling us they want: better value, more options and greater flexibility. Our relationship with Delta allows us to give customers the best of both the private and commercial air travel worlds.”

One indicator of the economy is how private jets are being utilized. If Delta Private Jets is any sign, things are looking good. They have been increasing the number of jet, currently operating 43. Delta does not own most of the jets (they own four). They are owned by outside people and corporations who allow Delta to operate and earn money for themselves and the jet’s owners. Think of it as owning a second home somewhere and allowing a third party vendor to rent it out when you are not using it to bring in additional income.

So, let’s pretend for a moment that we have access to flying jets like this (and if you are reading this and you do, can you take me for a ride sometime — I will bring the snacks). Probably for many people, they aren’t going to care as much what kind of jet they fly in, but for most of us aviation geeks, that is the most important part.

There are three main categories for aircraft: Light Jet, Midsize Jet and Large Jet. What size you want will be determined on how far you are flying, how much you want to spend and of course how envious you want to make your friends and people on the ground. If you are looking to burn some time today, then check out Delta’s website that shows the different aircraft options. Each aircraft shows detail of the layout and how far it can get you and of course a photo.

Once you are ready, you can either just tell Delta when and where you need the plane and they will give you a price estimate and you decide to move forward or not. You also have the option to buy a Fleet Membership Card that is based on the number of flight hours — starting at about $44,000.00 for ten hours of fly time. No matter how you do it, there are dedicated Delta staff to help you through the process — although if you have that kind of money, you might have someone making all these plans for you. 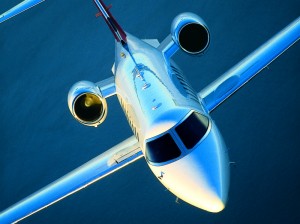 Speed, comfort and no TSA are just some of the reasons people choose private jet travel.

Just to get an idea of what it would be like not using a pre-paid hourly car, I tried to determine how much it would cost to take an extended weekend trip with five of my closest friends down to Las Vegas from Seattle in the middle of October on a medium sized jet — about $40,000.00 (I ask you not play with pricing yourself, just hours after testing it out, I had a Delta representative following up with me). Not cheap, but when you divide that by the six people and if you are a person of means, it starts to look reasonable (maybe?!).

Back to “how can people afford this?” For some individuals, it is just about having a lot of money where dropping this kind of cash just doesn’t matter. For others it is about time, where you can fly into smaller airports, not deal with security and travel to more destinations in one day than on commercial. If you have a business meeting with eight people involved that would all normally fly business or first, then the economics start to make even more sense — especially since they can work together in the privacy of their own jet versus on a commercial flight. If all eight people are travelling to work on a multi-million dollar deal, spending this sort of money is a wise investment in the overall scheme of things.

All Image From Delta Private Jets