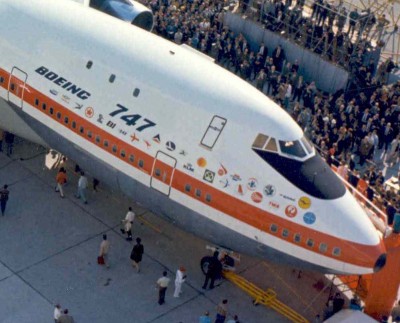 The first Boeing 747 with all those airline logos -- how many do you recognize. Click for larger. Photo by Boeing.

September 30th marked the anniversary when the very first Boeing 747 (called the City of Everett) was rolled out of Boeing’s hangars. Since then, it has been a legend and still is my favorite airliner. The Boeing 747 started flying for PanAm in 1970 and the newÂ variant, the Boeing 747-8 should be delivered during the middle of next year. This means the Boeing 747 should continue to be flying well into the future.

Boeing kindly shared via Twitter a photo of the first roll out. It is interesting to take a look at the airline logos on the aircraft and how many are no longer with us and there are some still flying Boeing 747’s.Â The first Boeing 747 is still alive and well, hanging out at the Museum of Flight in Seattle.

So, without looking it up in Google, how many airline logos can you recognize? It is not really a competition, but let’s do some teamwork to figure them all out. If you know some, list them in the comments and hopefully we can get them all. Off the top of my head I know 18 of the 27 that are there. SEE LARGER VERSION.

Thanks @skhwang for point this out!