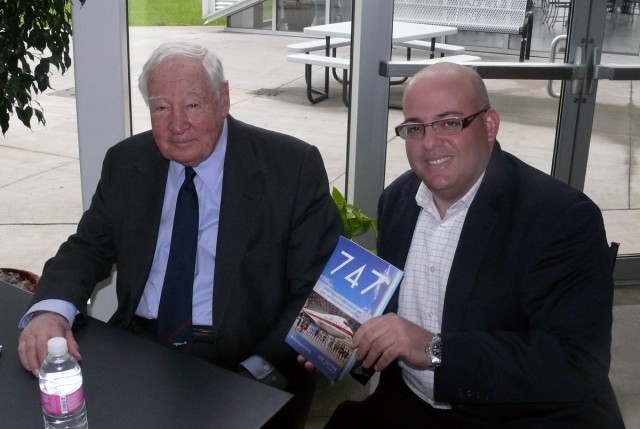 Chris Sloan (on the right) gets his Boeing 747 book signed by Joe Sutter (father of the 747) during the recent Lufthansa 747-8I Delivery.

I first met Chris Sloan during ANA’s delivery celebration of their first 787 Dreamliner. However, I already knew his name. I had previously seen his work in Airways Magazine and I knew of his site Airchive.com, although I didn’t realize he was the man behind it. We have quickly bonded over airlines and enjoy sharing our unique stories with each other.

When it comes to airline collections, there is no question that Chris has me beat. He has so many airline collectables it blows the mind. Luckily he has spent a great deal of effort to share his collection with the rest of the world. I wanted to learn a bit more about him and his website. Here is our interview:

We curate timetable, route maps, airline and manufacturer memorabilia of 1000s of airlines going back to the 1920s to the present. We really try to write a historic perspective of the history of an airline or aircraft model through itâ€™s memorabilia and route maps.

Another thing that sets us apart is our focus on airports. Lots of attention, and rightly so, is directed to plane spotting which Airchive.com does but we feature virtual in-depth photographic tours and background info on airports around the world. We are as interested in the terminals as we are whatâ€™s on the ramp. Likewise, these virtual tours extend to aviation museums with slide-shows that transport the user there virtually. One of our most popular sections are rare photographic behind the scenes tours of airplane manufacturers such as Boeing and Airbus

Other unique features include detailed galleries on airliner cabins, scrapped airliners, airline models (including cutaways), and aviation firsts such as trip accounts of the inaugurals of the Airbus A380, Boeing 787 Dreamliner, and the upcoming Lufthansa Boeing 747-8 Intercontinental Inaugural. 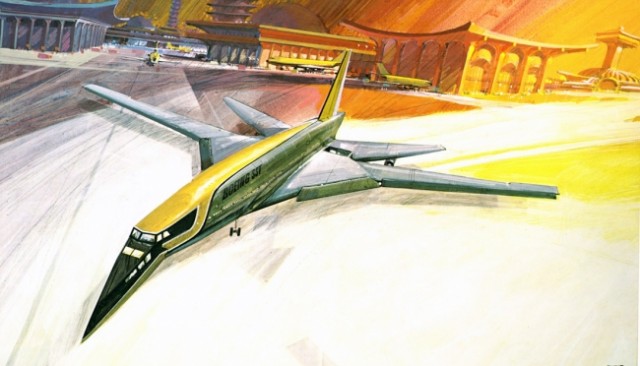 An image from the Boeing SST 2707 brochure from 1966. Chris Sloan / Airchive.com

AR: Why did you start it?

CS: I started the site back in 2003 as a way to give back to the commercial aviation community and share my massive collection as others had done online in person. It has turned into a passion project which has allowed me to meet many other folks of similar passion and undertake unique experiences. Also, at this time, the airline industry was engaged in the nadir of itâ€™s turmoil following 9/11 and running up to the Gulf War II, so I wanted to remind the flying public and airline staff just what an incredible industry they have. I now try to tweet @airchive relevant items everyday to provide a historical or different take on what is in the airline zeitgeist. 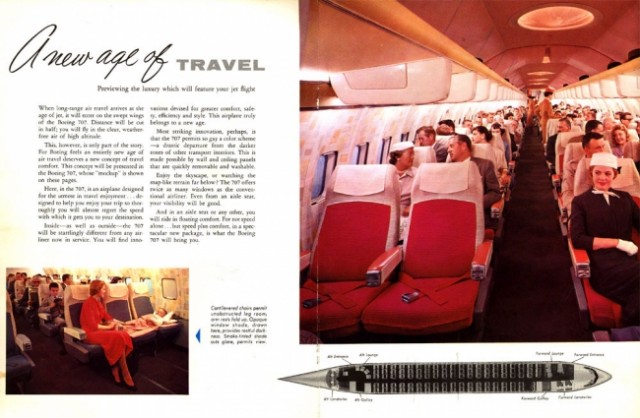 AR: When did you get into collecting airline memorabilia?

CS: I began collecting at the age of 6 years old. I would visit airports and city ticket officeâ€™s back then when those existed, and pester airline reservation agents to mail me timetables, route maps, safety cards, whatever. Iâ€™d also inhabit my favorite airports snapping off photos. Itâ€™s a life-long passion but I frustrated that I didnâ€™t have anyone to share it with. At this point, my model collection numbers over 300 including gigantic 747, DC-10, and Concorde cutaways; 10,000 timetables, brochures, airline seats, service items, even a desk made from the wing of the Lockheed L1011 prototype. I am not in this for the money. In fact, to borrow an old stock market adage â€œI buy and hold.â€ I have never sold anything, though have donated and loaned items to other museums.

As I have grown older running my own TV production company which leads to extensive travel â€“ this only increases my enthusiasm for this fascinating industry. One cool thing is I have combined some business with pleasure such as overseeing the John Travolta hosted documentary on the building of the Airbus A380, back when I ran production at TLC, and now creating and executive producing a reality series called â€œAirport 24/7: Miamiâ€ which is an unprecedented behind the scenes look at all the goings on at Miami International Airport. Itâ€™s a compelling, eye opening show for enthusiasts and non-enthusiasts alike. It will premiere later in the Summer on Travel Channel. 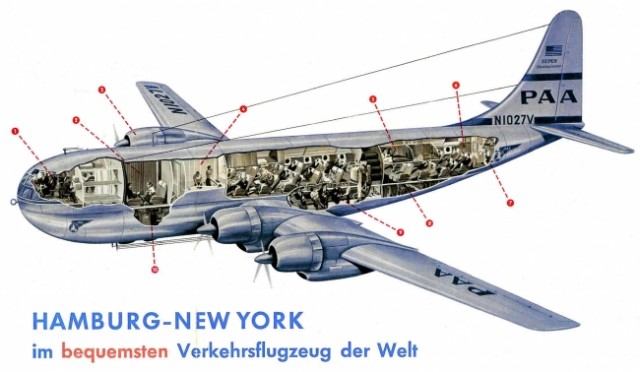 Cutaway of a Pan Am Boeing 377 Stratocruiser. Image from Chris Sloan / Airchive.com.

AR: Have you ever thought of starting some in-person museum?

CS: This is a long-term goal, or if I win the lottery a short-term goal, to either start my own or collaborate with others of like-minded interest. My â€œdreamseumâ€ would be a cross between LAXâ€™s Flightpath Museum and the Delta Airlines Heritage Center and Americanâ€™s C.R. Smith Museum. It would cover a broad swath of airlines like Flightpath but with the depth and actual aircraft of C.R. Smith and Delta Heritage. As a passionate Miamian, I would like it to have a South Florida focus on Pan Am, National, and Eastern.

I have taken part in public displays where I loaned materials out. There was a Museum of Modern Art (MOMA) Exhibit at the former TWA Terminal T5 @ JFK a few years back, but unfortunately about $5000 of my collection was stolen and never recovered so I am much more careful these days. Who wouldâ€™ve thought MOMA didnâ€™t carry insurance.

AR: What is your favorite piece you have on the site?

CS: Hard to say, so I will list some of my favorites:
* Boeing brochure for the 2707 SST
*Â The original US Air Force presentation for Air Force One
* Anything and everything involving my favorite airlines: Delta, Pan Am, Continental, Braniff, and National
* Complete timetable collections for major U.S. airlines going back to their histories
* My young son has come now has the bug. In fact, he is named after artist Alexander Calder who designed the Flying Colors Boeing 727 for Braniff. I have an autographed poster from Calder. 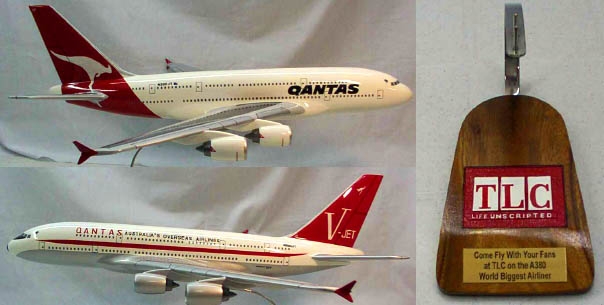 A special Qantas Airbus A380 model given to Jon Travolta. Photo by Chris Sloan / Airchive.com.

AR: What has been your favorite airline related experiences?Â

CS: Shooting with John Travolta the A380 doc was incredible. Such a gracious man and an enthusiast extraordinaire. As a reward, we all went up in an Airbus A-320 chartered for the shoot, and he took the controls.Â It has also been exciting being a part of threeÂ inauguralsÂ and deliveries including the Airbus A380, Boeing 787 Dreamliner and the Lufthansa Boeing 747-8 Intercontinental.Â Â

Meeting the Father of the Boeing 747, Mr. Joe Sutter at the Lufthansa Boeing 747-8 Intercontinental Delivery. Spunky, Pugnacious, and Outspokenâ€¦

Chartering the worldâ€™s only flying passenger DC-7 for a company party high over Miami. We buzzed the beach at 1,000 feet. Travolta and his daughter came on one of our flights from Miami to Key West where Pan Am was founded.Â Â Countless private ramp tours of LAX, Miami, and Mojave. These are hard to get and very gratifying, especially when friends and family have joined in awe as an A380 lands 100 feet away.

Flying the jump-seat from LAX to Hong Kong on a Boeing 747-400 back in 1999.Â Visiting the not open to the public Boeing Archives. The Airline Reporter has been there too, so you know how awesome it is.

Photographing the Boeing and Airbus Factories and Customer Delivery Centers andÂ flying a CRJ-200 sim through moderate to serve turbulence, with the radar painting read, and trying not to throw up!Â

Being on the inaugural of the Virgin America service to Florida with my idol, Richard Branson.

Producing our Travel Channel Series about the Miami International Airport. We actually created an airborne parade of a DC-7 and DC-3 which proceeded the Lufthansa A380 landing in Miami for the first time.Â And of course, all the international travel such as flying into Hong Kong Kai-Tak during its last days.

AR: How many airline models do you have?

CS: 100â€™s literally but the pride and joy are 3 restored cutaways:Â 1 of 3 Douglas DC-10 Prototypes made for the factory back in the 1960s to demo the airplane. Also aÂ Concorde cutaway that used to apparently be in the lobby at the Bristol Fulton Factory. It was in found in the attic of the interior designer of the Concorde, after 20 years.

AR: What is Airchive.comâ€™s relationship with Airways?

CS: I have been an avid reader of â€œAirwaysâ€ since it began publishing. In fact, I deserted commercial aviation for many years until 1994 when I picked up one of their first issues in an airport newsstand. I was immediately infected again by the bug. I still eagerly await my issue each month like every other enthusiastic subscriber. We have a strong cross-promotion and content-sharing relationship. As well, I am a frequent contributor to this excellent publication as it really speaks to my passion. 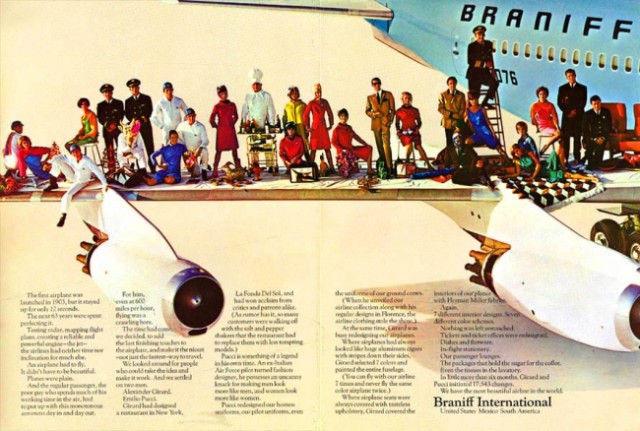 AR: What do you want to add?

CS: I view Airchive.com as pure passion. Â It takes a lot of time and money, frankly but it is a passion. It has been so much fun, particularly getting my sons interested in this field and meeting so many interesting, like-minded people. I get a lot of gratitude when people write from around the world how much the site inspires them or takes them back to memories they had in the business. When someone says â€œI got lost for hours on Airchiveâ€, that is the greatest compliment. I am adding features to allow more contributors as many wonderful folks send me items and photographs. As my children get older and business obligations grow, it gets harder to do this on your own. So I welcome anyone who wants to get involved and collaborate. Weâ€™re all stronger together then apart.