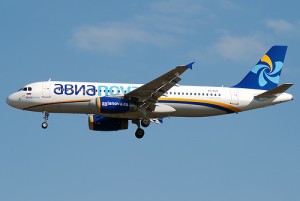 What do I think about their ads? Well any airline that gets me blogging about their ads are doing something right, and I will leave it at that. If  Spirit’s new ad is too saucy for you? Well maybe you shouldn’t take a look at the Avianova ad found by Matt Molnar with NYCAviation. 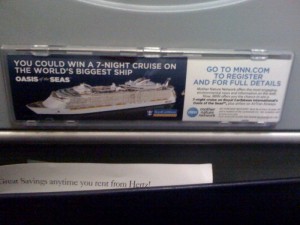 Photo of the AirTran ads taken for me just a few days ago.

On my recent flight on Virgin America I noticed they had a short ad for their Virgin America Credit Card on their in-flight entertainment system after the safety video. I thought, this was a good idea. Now, don’t get me wrong, I am no fan of watching commercials or flipping through a million ads to read a magazine. However, this concept just seemed to make business sense and I wondered why airlines do not make better use of ads to make additional revenue.

Having ads in planes can work. The biggest benefit is there is no additional cost to the customer. All the fees you pay for everything else is money coming out of your pocket and into the pocket of the airline. But ads cost passengers nothing (except for some annoyance) and make the airline additional money.

While I have been researching about this concept, AirTran announced that they will start placing ads on the back of their seats. They already had ads sticking out of the seat back pocket, ads on their napkins, and even ads on their pre-flight announcements. But they will be the first airline in the US to put ads on the backs of all their seats (even Business Class). Of course the initial reaction I have seen on the web is “OMG the world is coming to an end and AirTran is going to a new low,” (I am just paraphrasing) But really, is this all that bad?

Each seat will have 2.5″ x 9″ place to put different advertiser’s messages and “unlike other in-cabin advertisements, these messages will be fully visible to passengers throughout the boarding, taxi, takeoff, landing, and deplaning phases, offering companies a unique opportunity to reach consumers for periods ranging from a minimum of approximately 40 minutes to several hours depending on the length of the flight,” AirTran noted.

The press release said every seat should be outfitted by December 3rd, but I’ve heard from fliers there are still some empty seat backs. Luckily someone was able to send me a  photo of the ad (which is the blog’s main picture).

I recently talked to Christopher White at AirTran to figure how much they plan to make off these ads. White told me they expect to “gain seven figures annually in ancillary revenue related to seat back advertisements.” Right now they just have a contract with one company, Mother Nature Network, but they have several other companies express interest.

With AirTran having Wi Fi on their entire fleet, I think this could make for some interesting ads. A company could advertise something and point people to check them out right on the web. “Looking for a hotel when you land? Go online now, book a room, and we will pay for your Wi Fi on AirTran,” or something along those lines.

I would rather have to look at an ad for a few hours and saving a few dollars on my flight. Heck, the ads might even be entertaining if someone got creative with them and had passengers interact with the advertiser on the web somehow. Would you change your travel plans based on there being ads on the plane?