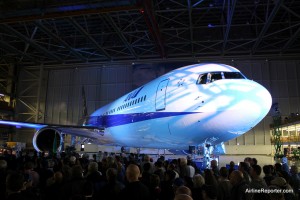 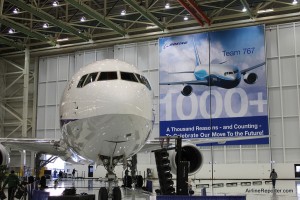 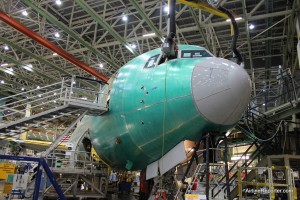 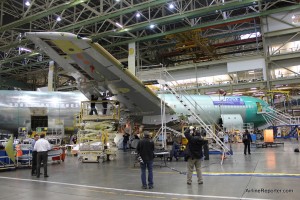 The Boeing 767 has remained in production for two major reasons: making it the next generation of military tanker and the Boeing 787 Dreamliner delays. Many airlines, including All Nippon Airways (ANA), were counting on the 787 Dreamliner to be completed long ago. Â Boeing has worked with airlines to provide them with temporary Boeing 767-300ER’s. “A couple years ago we started having discussions about providing 767s on an interim basis to some Dreamliner buyers as well as other carriers looking for twin-aisle planes. We saw interest from all regions for both passenger airplanes and freighters,” Leslie Hazzard with Boeing 767 Communications explained to me.

Right now, Boeing is storing three 787 Dreamliners on the current 767 line. There were two ANA 787’s (one in white livery, another in full livery) and one Air India.Â UnfortunatelyÂ we weren’t able to take photos of the 787 at that time, but it was very cool seeing how different the ANA Boeing 787 Dreamliner parked right next to an ANA Boeing 767. The 767 is a wonderful aircraft that has served the world well and hopefully will continue to do so, but seeing it next to the 787, it is obvious that the Dreamliner is the next generation of airliner.