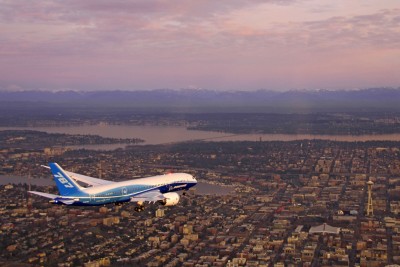 What an amazing plane and an amazing city. I feel so lucky to live here! Notice the Space Needle in the bottom right of the photo.

The Boeing 787 flight tests have been going great. Guy Norris with Aviation Week has a great write up with the details you can check out.

Found this picture from Randy’s Journal via the Seattle PI. Check out the bigger version for more detail of the city.

In June 2004, CNN reported that when pilots were exposed to a laser during a simulation, 67% experienced “adverse visual effects” and with a high powered level lasers, nine landings were aborted.

Although this has mostly been just annoying, I really don’t know how someone could live with themselves if they caused an airplane to crash. Many in the Seattle area speculate the local perp might be upset and protesting the new third runway.