It seems unlikely that this dispute would only revolve around the Boeing 747-8’s performance issues, since Boeing has been forthcoming about the aircraft’s additional weight for quite some time. In an email to the Puget Sound Business Journal Boeing stated, “It’s misleading to say we missed our specifications. After we set our original specification, we completely redesigned the wing, which is significantly heavier, but more than makes up for that in increased aerodynamic efficiency and lower fuel burn.’

I am curious to get your thoughts and figured it is about time for another poll (Note: if you are reading this on the Seattle PI or Reuters synidcation, you will have to go to https://www.airlinereporter.com to vote): 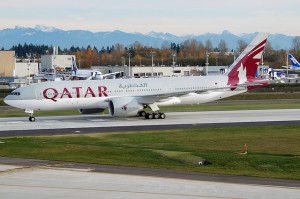 First off, who the heck is Qatar Airways? They have been around since 1993, but have really been growing rapidly into North America in the past few years. They are based (can you take a guess) in Qatar at Doha International Airport. They already have a fleet of 95 aircraft and 182 additional on order. Now, that is growth.