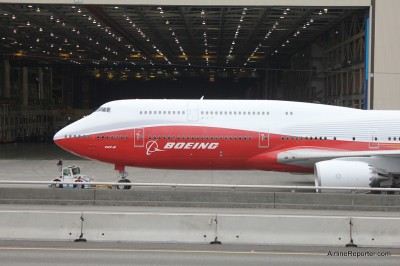 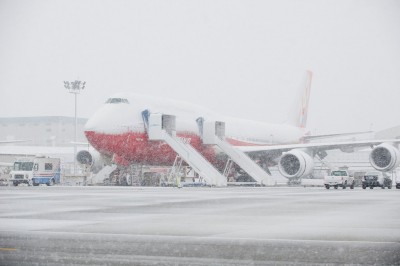 I have to say the color choice is gorgeous. I don’t think the real beauty comes out in the photos. The paint is metallic, so up close it really sparkles. So why orange right? Directly from Boeing: “The airplane unveiled today is painted in a new Sunrise livery of red-orange that only will appear on the first 747-8 Intercontinental and is a significant departure from Boeing’s standard blue. The new color palette honors many key Boeing customers whose cultures recognize these colors as symbols of prosperity and good luck.” Either way, she is one beautiful airplane and I cannot wait to see her fly.

As of now, the first flight is scheduled for Spring 2011. Since the Boeing 747-8 Freighter has been going through so many different flight tests, the additional tests for the 747-8 Intercontinental won’t be as intensive. This aircraft (N6067E) will be painted in the Sunrise Boeing livery during flight tests. It then will be painted to the customer’s livery before delivery. Of course, there is still no word who the owner of the first aircraft will be. There were representatives from Lufthansa and Korean Air present at the ceremony. Currently Lufthansa has 20 orders for the 747-8I and Korean Air has five.

UPDATE 5:00pm:
Just got to watch as the first 747-8I was pulled out of the factory and parked at the fuel dock. It was very nice seeing it in the natural light and I think these photos better represent what the aircraft looks like in person. During the event people were talking about the livering having red and that was difficult to see. Outside, you could clearly see the red and orange on the body and near-neon orange of the tail. It is one long plane and beautiful plane. Boeing just tweeted one from the ground that looks great and  I added seven more photos…