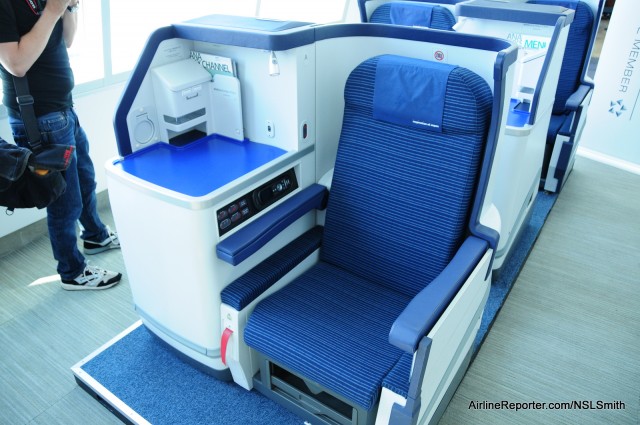 Step by step Boeing is getting closer to delivering their first 787 Dreamliner to All Nippon Airways (ANA). Today was a huge milestone with revealing the special livery and allow media, ANA employees and invited guests the opportunity to take a look at the inside. This first aircraft that will be delivered (ZA101 – JA801A) will fly domestically with-in Japan, so it has ANA’s new domestic interior. ANA is proud of their new international staggered business class, so they had a few seats on display at Boeing’s Delivery Center that we were able to preview before heading out to the hangar.

I decided to give the seat a shot. At 6’1″ 250lbs, I was hoping for the best. I have flown in ANA international business previously and I really enjoyed the old product. Honestly, I felt the new seats seemed a bit bland looking, but I was told they were designed to look futuristic. The older product has wood and really gives a warm feel, but I suspect the new product will look much better in the aircraft and it does provide a lot more privacy and space to store your things. It is hard to get the full feeling of the seat with only three in a row on display versus seeing it in staggered configuration inside an airplane. Because of that, I will reserve final judgement for testing it out on a future international ANA 787 flight (fingers crossed on that one) or possibly on the newer Boeing 777-300ERs that are also flying the new staggered business class. 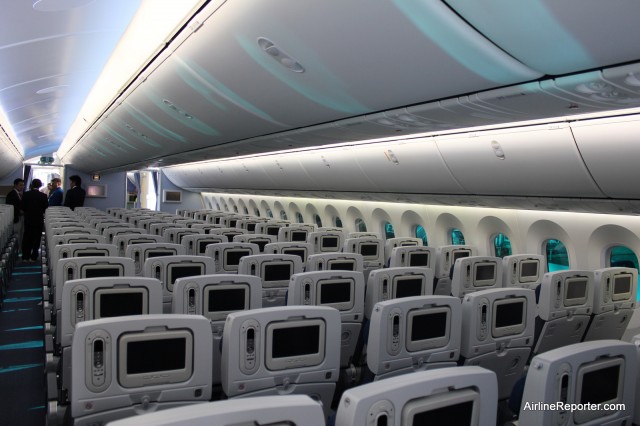 The tinted windows on the Boeing 787 Dreamliner makes odd "mood" lighting in the cabin.

I have felt privileged to previously been able to take an interior tour of Boeing’s third 787 Dreamliner, ZA003, but that one did not have a full interior. This aircraft looked like it was ready to take on customers with a full interior and it had that new plane smell (which smells very similar to a new car smell). When first walking on the 787 you get a feeling of space — it is not just Boeing PR talk, it is true. There are literal reasons with the overhead bins providing more space and the fact that the 787’s cabin is about 2.5 feet wider than the 767.  The 787 also has LED lighting in the ceiling that also gives a greater sense of height and space. 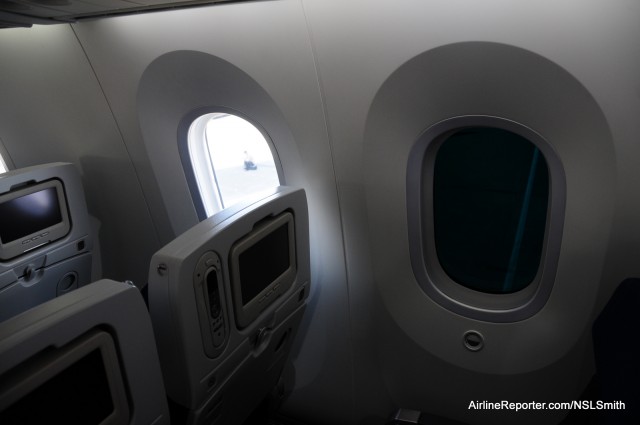 One window is clear, the other is darkened.

One of the many benefits of the 787 Dreamliner are the windows. Gone are the sunshades that either provide full light or complete darkness. The 787’s new smart-windows allow passengers to choose five different settings of tint. Even at the darkest setting, you are still able to see outside. The flight crew has control over all the windows at their computer station, giving them the ability to darken or lighten all the windows at the same time. 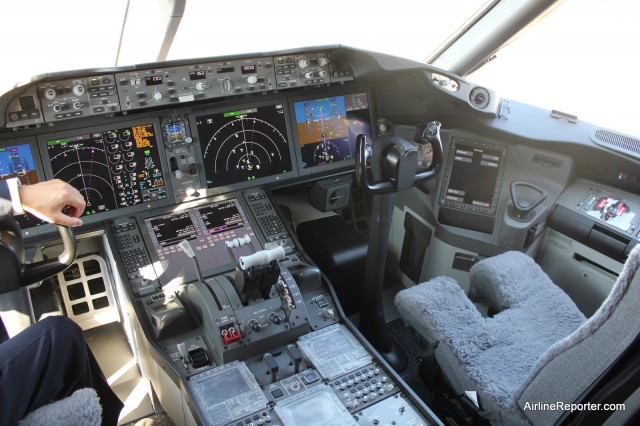 The best seats in the 787 Dreamliner are not in business class, but in the cockpit.

One cannot get a full interior tour, without a visit to the flight deck, which holds the best seats in the house. You could tell this 787 was new since there was protective plastic that was still on controls and displays around the cockpit. The pilots have an array of technology to make flying the aircraft easier and safer. Not only are there large screens that can easily show everything that is going on with the aircraft, but there are also Heads Up Displays (HUD) that allow the pilots to look out the front windscreen, while still seeing vital aircraft information like speed and altitude. 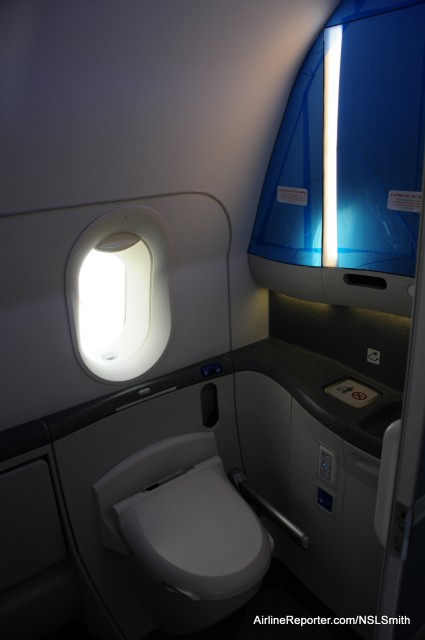 The center lavatory had a window. Notice the protective blue film still on the mirrors.

One of the most interesting features on the aircraft were the lavatories. First off, ANA has decided to offer female only lavatories,  meaning that most restrooms will have an image of a male and female, but others will display a single female image. On this aircraft, the central lavatory had a window and the only shade on the aircraft. There is a dimming switch, but for those who want total privacy, you are able to pull down the shade. For those who are used to a certain level of service in the restroom, do not worry, each toilet has a bidet with special male and female settings. 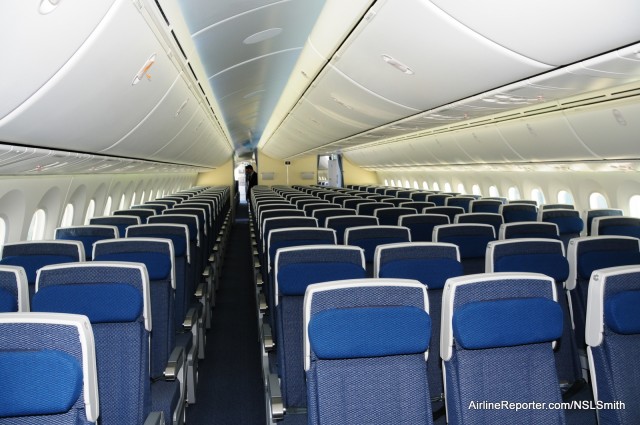 Looking to the back of the Dreamliner in Economy.

Since this was a 787 created for shorthaul flights, it has a small business class section and then economy in the rear of the aircraft. ANA was originally planning an economy-plus type section, but have decided not to implement that in this 787 for now. 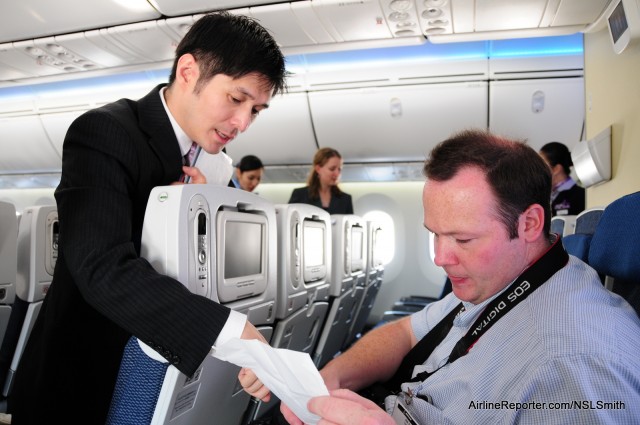 Here I am talking with Ryosei Nomura, who is Senior Manager of Public Relations based in Japan, about my thoughts on the new interior.

One of the interior updates are the fixed back shell economy seats. Those are the type that you can still push your button and the bottom part will move forward, but your actual seatback will not recline. This is to help save space for those behind you. Talking to some ANA folks, they stated they have received some negative feedback, but I really like the concept of the seats. I am one that will rarely reclines my seat out of consideration of those behind me and I hate it when I am working on my laptop and the person in front of me puts back their seat. With the seat in the “reclined” position, my knees were hitting the seat on front of me, but I was assured the longer haul economy will have a larger seat-pitch. But with my seat “un-reclined” I had no problems. Since it is not as obviously if your seat is reclined, each seat has an indicator on the head rest which will quickly show the flight crew if the seat is in proper position for take off or landing. 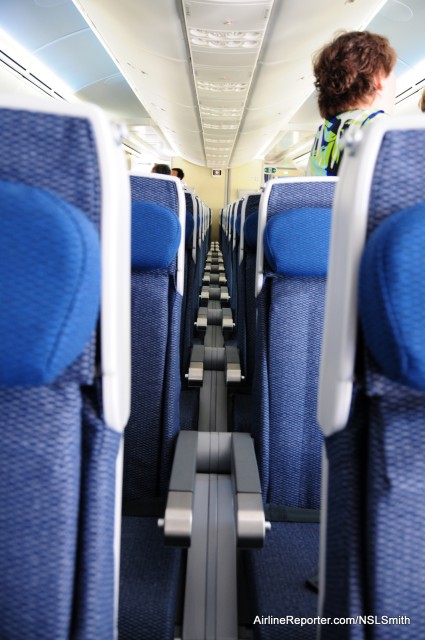 ANA has decided to provide a double armrest in the middle of their 787 Dreamliners.

The first aircraft in domestic configuration is laid out with 12 business class seats in a 2-2-2 layout and 252 economy in a 2-4-2 layout. The short-haul international configuration will contain 42 business class seats and only 180 economy. The long-haul international ANA 787 will fly 46 of the new business class staggered seat and 112 economy, providing more seat-pitch than the domestic aircraft. One aspect of ANA’s economy that wasn’t at first obvious was the center armrests. No one likes to be sitting in the middle of a 2-4-2 layout, but ANA gives passengers a double arm rest in the middle, making the it less painful to have that middle seat.

For the average passenger, it might not be totally obvious they are in a new 787 Dreamliner. However, they should notice that there is something different, something better about the aircraft. For those of us who know airplanes, it is very obvious this is a next-generation airliner. Yes, the 787 has been delayed three years, but once people start flying on them, I doubt many will care. I cannot wait for this to become the new standard in world travel. A big thanks to Boeing and ANA for holding this event and inviting AirlineReporter.com along for the ride.