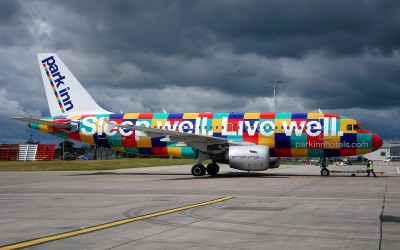 By looking at the livery you surely know it is advertising the Park Inn Hotels which love their nice colored boxes. But it might take a little more searching to find the airline flying this plane Â (hint: check the engines).

This is an Airbus A319 flying for the airline Germanwings. TheÂ airline is based out of Germany and is a low-frills airline.Â It has a fleet of about 25 Airbus A319’s and flies to just over 65 destinations.

The airline is known for its special liveries. You can check out their T-Mobile airline livery, the popular Bearbus livery, the other T-Mobile livery, Â the HamburgShopper livery, theÂ “Mhhhh, Baden-Wurttemberg” livery and I kind of like their “normal” livery.