Boeing takes Simpliflying on a special tour of the Boeing 787 gallery and a sneak peak of what the 787 will look like on the inside. Check out Simpliflying’s blog for additional information and pictures. 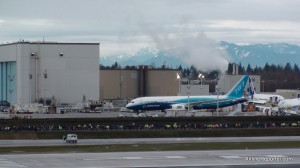 The Boeing 787 Dreamliner had a wonderful first flight yesterday. It was covered by multiple media outlets and many different formats, from twitter, to standard live TV, to web feed, to even streaming video on an iPhone. Reading the forums (and even my friend’s Facebook statuses) a lot of people keep asking “why should I care?”

* The 787 is made up of 50% composite material. I have seen people say “I would much rather fly on a metal plane than a plastic one.” The carbon fiber used in this aircraft is not like any plastic. Carbon fiber is stronger and lighter than metal and I would much rather fly in a “plastic” than “metal” plane any day. Take a look at this picture of the inside structure of a Boeing 707. All the metal panels riveted together. Notice all the additional structure needed around the windows. Compare it to the inside of the 787. The 787’s composite body  is one solid structure and with fewer weak points. For example, the Boeing 747 requires about 1million holes to be drilled in its fuselage, but the 787 requires less than 10,000. (take a look at all the Boeing 707 and 787 material pictures I took at the Future of Flight)

SUCCESS! The plane was AMAZING taking off. Above is my video of the event. Everyone was cheering as the 787 flew over us. It will conduct 5hrs of tests and then land south down at Boeing field in Renton, WA. It was wonderful to be a part of this event, thank you to the Future of Flight for having me.

Other media:
* All my Flickr pictures
* Follow the first flight on Flight Aware
* Watch the take off on KIRO7
* Watch it on KING5
* FlightBlogger video
* Good rundown of this morning and the test flight via Aviation Week
* Seattle PI photo gallery
* Air to air photos by Boeing
* Air to air video via KING5

UPDATE 12:37pm: Boeing is reporting that the first flight will end early, landing at Boeing Field at 1pm. No official word from Boeing why the flight is ending early, but Boeing said they might end early. Could be weather, it has gotten much worse since liftoff.

UPDATE 1:03pm: Boeing is stating the flight is ending early because of weather, no problems with the plane. Boeing, Flight Blogger and KIRO will be covering the landing live.

UPDATE 2:38pm: Been watching the live news conference (I stayed up north and didn’t go down to the landing) via Boeing’s website. These pilots are awesome. They said the flight went perfect and can’t wait to get in the air again!

UPDATE nextday: I have had a lot of people ask “why should I care?” I answered that question with a new blog. 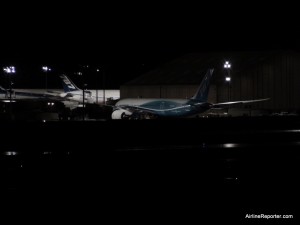 Picture of Boeing 787 Dreamliner picture taken about 7am today

It is almost 5:30am PST and we are about 4.5 hours away from the Boeing 787 Dreamliner’s first flight. The weather isn’t perfect, but so far it is still on!  This is a VERY special event for a very special airplane. Much like the Boeing 707 marked the beginning of the jet age, I think the 787 will mark the start of the next generation of how planes are made and how materials are used.

I will be enjoying the event at the Future of Flight, which has one of the best views of the runway. I hope to take many photos and a few videos, and I will post them on the blog as soon as I can. Catch second by second coverage of the events on my TWITTER ACCOUNT(you don’t need to sign up to read my tweets) and I will try to keep my blog updated as the events unfold. I have two laptops, a camera, an iPhone, and a video camera. Hopefully that will be enough to share this event with you :).

Of course, the first flight is not the end of the Boeing 787 trials, but just the very beginning. I hope and expect nothing else to delay the aircraft, but there are still a lot of opportunities for things to go wrong. Jon Ostrower, the FlightBlogger, lays out what the Boeing 787 has left to do before it starts flying its first passengers.

I will be updating this post throughout the day…

* UPDATE 7:30am: Lots of people and media showing up at the Future of Flight. I just updated my picture for this blog with one I just took. Make sure to follow live feed via BOEING’S LIVE FEED and also the FLIGHTBLOGGER.

* UPDATE 8:20am: Flight aware has BOE01 listed for a 10:10am PST takeoff. Anyone guessing that might be the ZA001 Boeing 787 first flight? If you are in the Seattle area, the lobby/cafe/gift shops of the Future of Flight are open for you to warm up. You can also sign up for a raffle to win a Boeing 787 Model. If you come in you should come say hi to me!

* UPDATE 9:05am: Boeing employees are starting to line up along the runway. Hopefully that is a good sign. Pictures I have taken so far have been uploaded to my flickr account.

* UPDATE 10:32: Just watched the Boeing 787 make a successful take off. Videos and pics to follow soon!