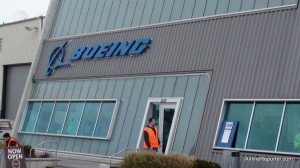 Boeing facility at Paine Field. Photo taken by me during my Boeing 787 interior tour.

When the Boeing’s 787 Dreamliner first took flight back in December 2009, there were those who questioned if Boeing really missed out on a customer relations opportunity.

Yes, Boeing had a live video feed on the internet and posted some wonderful photos and videos on their special newairplane.com website, but it still left some wanting more. People questioned why weren’t they on Twitter? Why didn’t they provide more for those that love Boeing? I somewhat agreed and felt that Boeing was making an effort, but was still distant from their fan base.

However, I think things are changing.

I have always been a frequent visitor to boeing.com, however I have been very impressed with their newer website newairplane.com. It isn’t just dry information that airlines or engineers might be interested in, but something that can really build passion for the Boeing brand. You can check out what new liveries will be on the Boeing 787 Dreamliner, take a virtual tour of both the Boeing 787 or the Boeing 747, find lots of great multimedia, and much more. It looks like I am not the only fan. Bernard Choi, with Boeing Communications, tells me that newairplane.com gets about 5-6million page views each month. That alone is a great indication, people want a closer relationship to Boeing. 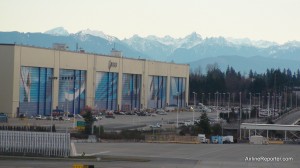 Boeing has also stepped into the world of Twitter. They now have three accounts: @BoeingAirplanes, @BoeingCorporate, and @BoeingDefense. And really, they are doing an outstanding job, especially only being on it for about two weeks. This week, they had their first real test of social media and I think they passed.

John Windsor, who specializes in marketing and advertisement, blogged that his son sent a photo to Boeing of a new airplane with a pretty cold response. Boeing sent a canned reply stating they do not take any outside ideas and have destroyed his son’s information. Of course this is a form letter sent to anyone who submits an idea and they didn’t have a specialized form letter to reply to a child. Honestly, it made Boeing look like it has no compassion.

A few people Tweeted the blog and it got to Boeing. Boeing Tweeted, “The letter Mr. Winsor posted is, as he said, a required response. For kids, we can do better. We’ll work on it.” Cool. They could have defended their actions, but admit that it was not appropriate and they want to improve the way they do things.

“Mr. Winsor…I think I can address your comments. As you state, we have to respond to the thousands of unsolicited ideas we receive in a way that protects us against possible infringement claims. Having said that, we can do better when the idea clearly comes from a child as enthusiastic as your son. We will work on this. I hope Harry remains fascinated by airplanes and grows up to be an airplane designer. To help him and others like him we maintain the following website. I hope he enjoys it.” 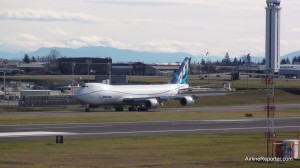 The Boeing 747-8 during taxi testing at Paine Field before its first flight.

To me, that is quite awesome. He made his comment right after I made mine and I like to think I am quite quick. With all the changes and this Twitter incident, I started to wonder if Boeing was trying to directly interact with customers more than they have in the past.

I decided to try and find out. I wrote to a few folks at Boeing and heard back from Todd Blecher (remember he is the Boeing Corporate Communications director that made the blog comment) very quickly. I asked if Boeing was consciously making an effort to connect better and how they were going to respond to Mr. Winsor’s son, Harry.

Blecher assured me that Boeing will be sending Harry some items and he actually spoke with him on the phone, thanking him for his drawing and he hopes when Harry grows up, he will design airplanes for Boeing.

He also confirmed my hunches that Boeing is making a real effort here. “We spent much of the past 12 months developing and now executing an approach to online communications that makes sense for Boeing and our audiences. We figured out what we could bring to the table and how we would be willing to engage. We drew inspiration from many areas, including Randy’s Journal, newairplane.com, our corporate advertising, and other organizations.”

They realize they are new to this game and the transition won’t happen overnight. “We are learning as we go but I have no doubt that are on a journey that will see us really change the way Boeing communicates…the bottom line is we’re changing.” When I asked Blecher about their future plans he told me they are looking at Facebook, thinking about a future mobile app and possibly even a Boeing TweetUp (where people on Twitter get together, ie Aviation Geekfest). Boeing talking about a TweetUp? That’s amazing.

Blecher realizes they might not make everyone happy. “Not everybody in our audiences will like our approach. But, to paraphrase Sinatra, we’re doing it our way because to try it any other way, to expect an organizational mindset to change overnight, is a sure way to set yourself up for a lot of frustration and aggravation and mistakes.” Even if they might make a few mistakes and frustrate a few people, I think it will be worth it in the long-run.

Who knows, if Boeing can really build that brand loyalty, maybe more people will be saying, “If it ain’t Boeing, I ain’t Going!”