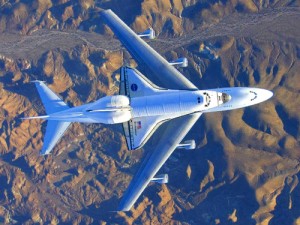 Space shuttle sitting on top of a modified Boeing 747 - Click to see video.

I know it is not directly related to airlines, but close enough. You have a modified Boeing 747 that can fly the Space Shuttle across the country.Â  The process of getting the shuttle on and off the Boeing 747 is not an easy task. A reader pointed out a site that shows a bunch of photos and also a time-lapse video.

Thanks Dan for the tip!

Japan Airlines flight 61 from LAX to Japan was just pulling back from the gate, when its left outboard engine sucked an empty container that was being driven too close to the jet. This Boeing 747-400 has about 60,000 lpf thrust which can create a lot of sucking power. The container is about 5′ x 5′ x 4′ but looks quite small while parked inside the engine. The passengers had to be unloaded and the plane was taken for inspection.