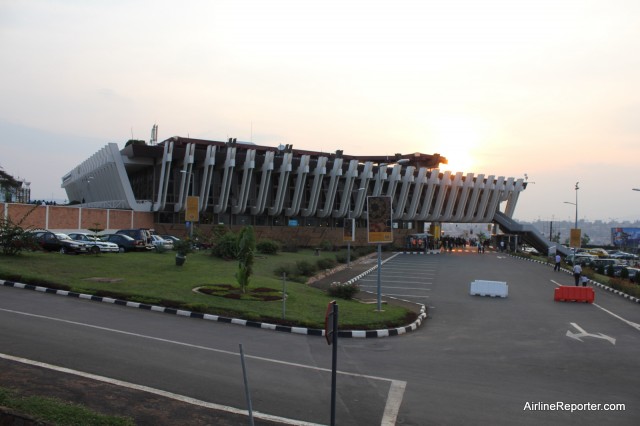 When flying out of Kigali, Rwanda, it is best if you have a lot of patience — there is a lot of waiting in lines. I got to the airport about five hours early, so I was prepared to wait. I figured it wouldn’t be a big deal, since I read there was free WiFi in the front lobby, which consists of only a coffee stand and a few seats. Unfortunately, the WiFi was not working, so I got myself a cold drink and started going through all my photos from my trip to Rwanda.

Passengers are not allowed to leave the lobby area to go to the ticket counters until it is two hours or less before your flight departs.  Once I reached the two hour mark, I was able to go outside and wait in-line to go through the first set of security. Since three flights were leaving about the same time, a large group gathered outside waiting to get back inside. Before getting back inside we all had to have our documents reviewed and since I did not have access to a computer, I had to show my passport and my confirmation on my smart phone. I was given some looks, but they still let me through where I had to wait in another line to be screened.  The first security screening was much like in the US, where I had to take off my shoes and take out my laptop.

After I went through security, I headed to the ticket counter, but was stopped by a security agent and told I had to go back and wait in a second line to have my passport scanned and my documents reviewed again. Sigh…okay.

After waiting about 15 minutes in that line, my documents were checked and I was finally allowed to wait in the ticket counter line. I was previously given a center seat, not something I wanted to have for a 10 hour flight. Luckily, I was able to get a window seat, so I thought I was set and headed towards the gate. 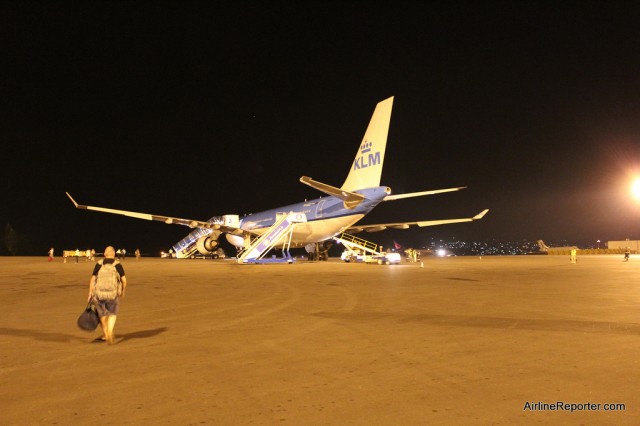 It is awesome to board a wide-bodied A330 on the tarmac of a small airport.

I followed signs telling me to head upstairs to get to the gate waiting area. On top of the stairs there was another, yet short, line for customs. They checked my forms, asked me a few questions and off I went to another waiting area, but this was still not the gate.

I was now in another waiting area with only 32 seats and a small bar area. Although outside it was cool, the upstairs waiting area was hot. There was a very small, maybe 19″, TV playing something not in English in front of the seats, but there weren’t enough for me to sit down. After a while we were allowed to move through another security check point to wait in a larger waiting area, which would be our departure gate.

Yes! After a six hour wait at the airport, our KLM Airbus A330 had arrived and we were told to start lining up. I knew there were no jet-ways, but I wasn’t sure if we would be bussed out to the plane or able to walk from the door to the plane; I was hoping for the walk. At the terminal door, we had our documents checked again and out onto the tarmac we went — sweet, no bus.

Kigali Airport is small and it was neat walking along the tarmac seeing a Brussels A330 and KLM A330 both in the middle of Rwanda sitting next to RwandAir’s two 737s and two CRJ200s. After having my documents checked one more time at the bottom of the stairs, I was on board the A330 and ready to find my seat.

Normally, I am aware where my flight came from and where it is going. However, I just received my itinerary for my flight home the day prior and with limited internet access, I had no idea. It didn’t seem like there were many folks in the waiting area to fill up an Airbus A330, so I did not know what to expect when getting on to the aircraft or even if we would have a few stops between KGL and AMS. When boarding, it became clear the aircraft had come from somewhere and I was guessing it was a long flight since the plane was full and people looked tired and grumpy.

Map of my flight from KGL to EBB then AMS on a KLM Airbus A330.

Turns out the flight had some passengers from Amsterdam, but was heading to Entebbe, Uganda (EBB) from KGL. It was pretty lame, since the person who had had my seat obviously had just gotten off. It was still warm and there was trash everywhere. However, I was told it would be a quick 35 minute flight to  EBB where the aircraft would be fully cleaned.

I did not have far to go to find my seat. I was sitting in seat 15A which was in the KLM Economy Comfort section located near the front. This gave me priority boarding, a few inches of additional leg room and more recline. It was nice, but there was an in-flight entertainment computer under the seat in front of me, eliminating half of my leg room. I thought with the big box in the way, I would at least have an outlet, but there was no in-seat power which was very disappointing. Kigali Airport is not known for the abundance of power outlets and by the time I boarded my electronics were needing some juice.

KLM definitely has their official color of blue down. Not only is the outside of the airplane blue, but the carpet is blue, the seats are blue, the bulkheads are blue and the flight attendants are all wearing a bright blue. When the flight attendants have their dress jackets on, the blue seems almost a bit overpowering and almost feels like I am on the official airline of the Smurfs. Good thing I like blue. 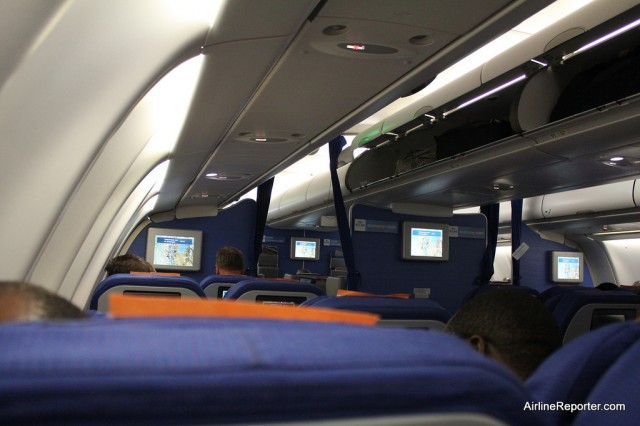 Blue is an obvious theme on KLM aircraft.

The aircraft loaded up quickly and we were ready to head to EBB. That was the shortest wide-bodied flight I have taken. It was just enough time for the flight attendants to run up and down the aisle to give us orange juice boxes and sit back down.

By the time we landed in EBB, it was obvious that the flight attendants were done with their shift. Along with the passengers, they came across as very tired and grumpy. This was okay, since they got off in Uganda and a new, fresh crew got on board.

During the layover, there were not too many of us left on the plane and a cleaning crew came on and worked around the passengers.  It was interesting to see them in action, but it was obvious they were annoyed that so many passengers were in the way… I do not blame them. We had only been on the plane for about 40 minutes and passengers were out of their seats and walking around, getting in their way like we had just completed a marathon flight. 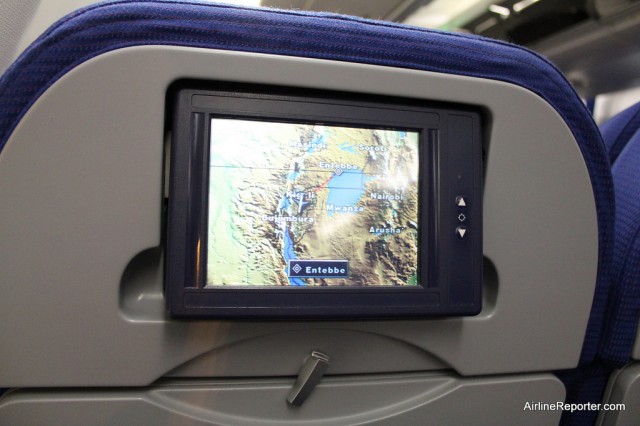 The seat-back in flight entertainment isn't the best, but surely better than nothing.

I am not quite sure why they weren’t able to run the APU and A/C while we waited and I heard multiple passengers complain, but the cabin did not seem to cool down until we started boarding again. Maybe it was an oversight with the changing of the crew, but after working up a nice sweat, I wasn’t able to cool down until almost landing in AMS.

Every economy seat has its own in-flight entertainment which is nice. The system seems a bit old and takes a little more time to navigate, but it is all free, which makes it worth the trouble. There is a decent selection of movies and TV shows in a number of different languages. It was entertaining enough for a one-way ten hour flight, but if you had more than that, the entertainment would get stale pretty quickly.

Talking about stale, we were served some hot food during the trip and a choice between beef and pasta — I chose the beef. I guess “stale” might be an unfair way to describe the food, it was not that bad, but not that great either. It is what one would expect from economy food from an airline. 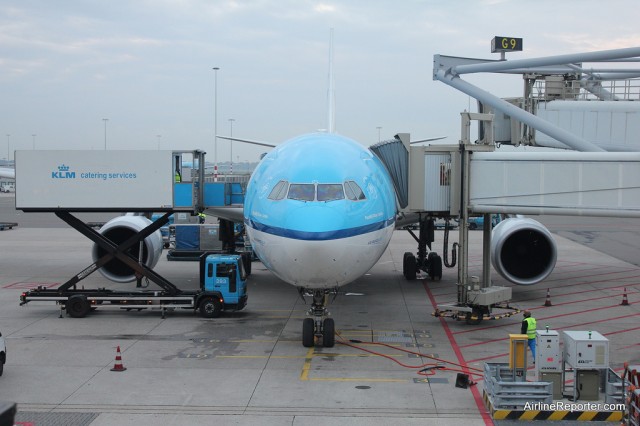 My KLM Airbus A330 (PH-AOL) at Amsterdam after my flight.

I was actually quite surprised how quickly the flight went. I watched some movies, got some sleep, ate some food and BAM we were heading into Amsterdam. I think even though part of my legroom was taken by the in-flight entertainment system, the extra room and recline really helped.   It was a little frustrating when the person in front of me decided to recline their seat all the way (remember Economy Comfort has the ability to recline more), but being by the window with only another seat next to me, with a few inches of extra room made the flight enjoyable.

After landing, I had a four hour layover in Amsterdam before flying on a Delta Airbus A330 back home to Seattle. I will be reviewing that flight in the near future.

A FEW OTHER PHOTOS OF THE TRIP