Yesterday I talked about how flight attendants must learn a lot about safety and hopefully never have to use it. Once per year current flight attendants must return to AirTran’s training facility in Atlanta, GA to practice their safety skills. Part of that training involves the proper procedures during a water landing.  The recent US Airways ditch in the Hudson River is a reminder that these things can happen and by following the flight attendant’s commands can save lives.

The ditch training was inside a mock Boeing 717 with about seven rows. The flight attendants had no idea that fake smoke would be pumped into the cabin. I knew it was going to be dark (I had night vision on my camera, in reality you could barely see anything). I knew it was a water landing. I knew there was going to be smoke pumped in. I also knew it was all fake.  However, once the training started, it was very disorienting and although the flight attendants were yelling to get my life vest, I initially forgot it and had to go back to get it. That could have been the difference between life and death.

In the video you can hear some laughing and we were all having a good time with the practice, but it was taken very seriously.  There were only about 15 of us in that small cabin, but it was shocking how long it took us to get out. There obviously was no real panic or rush to save our own lives, I couldn’t imagine the chaos that would occur during a real crash with over 150 passengers trying to evacuate an aircraft. 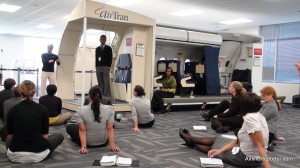 Class of new flight attendants learning how to open and close the main cabin door.

Every time you board an airline you are greeted (at least should be) by a friendly flight attendant. You will also see them serving you drinks, snacks and, if you are lucky, a meal. However, their job is so much more important than the things you see on an average flight. I think each of us frequent fliers feels as though we have  a good idea of what a flight attendant’s job duties are. However, I wanted to see what they are taught first hand. 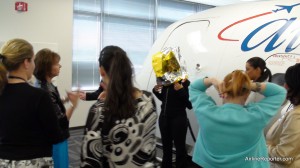 Current flight attendants putting on full head gear to use while putting out a fire.

The newbies were mostly going through customer service and in-flight service training whereas the pros were practicing different safety procedures. Seeing both sides really let me know how important both aspects are to being a great flight attendant.

Hopefully most people will never have to witness a flight attendant’s safety training kick in, but it could help to save your life someday. During the time I was following the pros around I witnessed them practice putting out fires and providing first aid. They have to know which type of extinguisher to use on specific types of fires, how to make the extinguisher work, when to put on the full head gear and how to properly put out a fire. This stuff is much more complex than just pouring a cup of coffee. 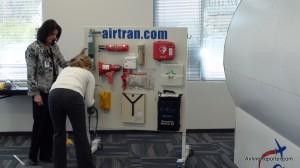 Practicing how to use all the safety equipment and hoping they won't ever have to use it.

While hanging out with the newbies, watching them learn where safety items are located on an aircraft,  I asked on Twitter,  “Anyone guess the 5 things checked by #AirTranFA [flight attendants] in the [lavatory] during preflight?”

Most people responded with things like, “check the soap level,” or “make sure it is clean.” Although, yes that might be part of their job, no one really answered any safety related questions. Here are the five things they have to check:

1) Make sure the smoke detector is operating.
2) Check the trash lid to make sure it automatically closes. This is because passengers will try to smoke in the lavatories (big no-no) and put their cigarettes out in the trash, which can catch fire.
3) Make sure the fire suppressant system for the trash is full (a bit off topic: I heard a story that some passengers will hover over the toilet and blow smoke down the drain to avoid being detected).
4) Look to see that the “No Smoking” place cards are still there.
5) Make sure the ashtray is functioning. This might seem silly for why there is an ashtray, but in reality passengers will try to smoke on flights and if they do and the alarm goes off, they want them to properly dispose of the cigarette instead of putting it in the trash and possibly starting a fire. 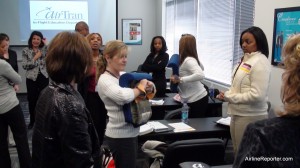 Practicing to make your seat cushion your best friend.

The five items to check in the lavatory are just one example of the many things that flight attendants do, that passengers have no idea about.

Yes, they are going to make sure the bathroom is ready for you to use, but they also make sure it will be a safe flight.

Back in the day, flight attendants had to be nurses. In case something happened mid-flight, they could then assist the passengers. Even though being a nurse is no longer a requirement, they must still be trained in proper CPR procedures.  In most cases there will be a trained nurse or doctor on a flight that will be able to assist a passenger in trouble, but if not, flight attendants are trained to keep a sick passenger alive until the flight can land.

Another part of training that the pros went through, was practicing how to handle a plane ditching into the water. Tomorrow I will post about this experience. I don’t want to ruin it, but it involves darkness, smoke,  and screaming.