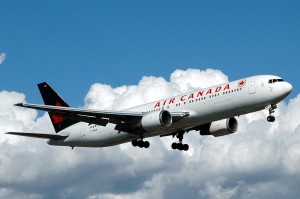 Who needs all these body scanners and security. One Canadian man found all he needed was a credit card and Costco membership card for an international flight. Doug Tiedeman, 21, who has cerebral palsy and the mental capacity of a 12-year-old took an Air Canada flight from Calgary to London on April 27th on his own. Understandably his parents are quite upset that the airline would allow him to fly. According to Transport Canada rules, adults need government-issued ID such as a driverâ€™s license or passport to board a passenger plane.

Doug took a taxi from his home to the airport and bought a ticket using only a credit card and Costco card. When his mother noticed he was missing she hit redial on the phone, which called Air Canada’s reservation center. When she tried to confirm if her son had purchased a ticket or was on a flight, the airline was not able to tell them due to privacy concerns. Doug was trying to meet a woman in London who he was chatting on Facebook with. When he arrived in London he was quite overwhelmed and after he phoned the girl he was to meet (who had no idea he was coming), she told him to call his parents.

Working with an airport employee, Doug purchased a ticket home, but had to spend the night at a local hotel. He was able to return safely home and doesn’t feel the need to fly anytime soon.

Air Canada states they are currently investigating how Doug could flight without proper identification.