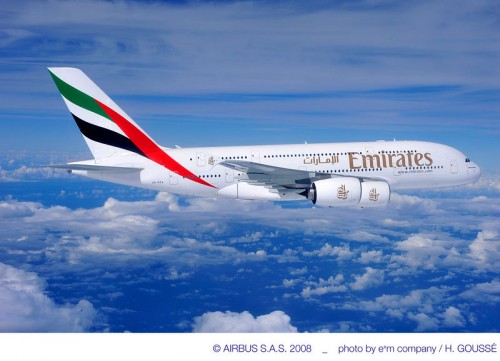 INFO AND PHOTO FROM AIRBUS:

Emirates Airline and Airbus have completed discussions and signed the firm contract for 50 additional A380s originally announced at the Dubai Airshow on 17th November 2013. The contract documents were finalised by Tim Clark, Emirates Airline President, during a visit to Airbusâ€™ Headquarters in Toulouse, France.

Tim Clark, President Emirates Airline said on the occasion: â€œThe A380 is our flagship aircraft. It is popular with our customers and delivers results for us in terms of operational performance. That is why we have ordered these additional 50 aircraft, to add to our A380 fleet.â€

â€œThis order is a major vote of confidence in the A380. Since delivery of their first aircraft in July 2008, Emiratesâ€™ A380 fleet has grown to be the largest in the world with 44 A380s in operation. We congratulate Emirates on this impressive achievement and thank the airline for their continued support of our flagship aircraft. As Tim Clark has often said, “The A380 really is a game-changing aircraft.â€ commented John Leahy, Airbus Chief Operating Officer, Customers.

Since first entering service in 2007, to date 122 A380s have been delivered, to ten world class carriers. The aircraft flies 8,500 nautical miles or 15,700 kilometres non-stop, carrying more people at lower cost and with less impact on the environment. The spacious, quiet cabin and smooth ride have made the A380 a firm favourite with both airlines and passengers, resulting in higher load factors wherever it flies.