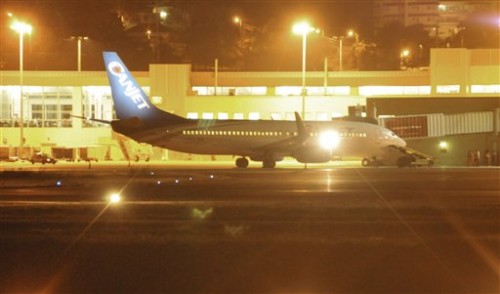 A Boeing 737 belonging to CanJet sits on the tarmac near the Jamaican resort of Montego Bay, Monday, April 20, 2009. A gunman described as “mentally challenged” forced his way onto the Canadian jet and was holding up to six crew members hostage, officials said Monday. The man demanded to be flown to Cuba after boarding the Boeing 737 late Sunday, Jamaican Information Minister Daryl Vaz told CNN. Nobody had been injured, officials said. There were 159 passengers and eight crew members aboard CanJet Flight 918 when the gunman barged through security and forced his way onto the plane, police said. He released the majority of those onboard, but was still holding six crew members, police said. (AP Photo/Patricia Roxborough, Jamaica Observer)